National Indigenous Women's Federation (NIWF) is a Kathmandu based umbrella organization of Adivasi Janajati (Indigenous Nationalities) specific women's organizations. The multiple roles that Nepalese Indigenous women play contribute to maintain preserve and promote the distinct identity of Indigenous peoples. Their language and cultural skills, traditional knowledge in management of community and resources are distinct. Importantly, they are the knowledge holder to nurture mother earth, environment and natural resources, and play a vital role in sustainable management of mother earth and environment, thus they also contribute to all human society nationally and globally. Traditionally and culturally indigenous women are decision makers in family and society and often play role for peace building and reconciliation. However, their roles and contribution are not recognized by the state. Laws, policies and practices highly marginalize, exclude, deprive, and discriminate indigenous women. Despite of this fact, indigenous women retain some or all knowledge, skill, culture, decision making role and traditional institution as well. So women leaders from different indigenous organizations established NIWF as a federation in 1999 and registered NIWF in 2000 with the aim of ensuring right to participate in all state structures with their distinct identity. Presently, 43 Indigenous Women's Organisations, 61 District Coordination Council (DCC), 7 Provience are affiliated under this umbrella organization.

General Assembly (GA) is a sovereign body of NIWF, convened in every three years. There shall be one representative from each member organization in the GA. Federal Council (FC) comprises of representatives of member organizations and the secretariat. FC has mandates to formulate program, implementation and observation according to the resolution of General Assembly. It has further a mandate to carryout necessary work to achieve objectives of the NIWF complying its Constitution. The Secretariat comprises of eight members, out of them seven members including the Secretary General are elected by GA except the Chairperson who serves according to the rotational turn of member organization. The mandate of secretariat is to implement the decision of Federal Council and day to day work of the NIWF. The secretariat has mandate of conducting various projects and programs to achieve the goal of NIWF. The projects and programs are managed by Executive Director. NIWF previously worked with DanidaHUGOU, UNDP, CECI, WAPDCA, Asia indigenous peoples pact (AIPP) Thailand, AED, National Foundation for Development of Indigenous Nationalities (NFDIN), Nepal Federation of Indigenous Nationalities (NEFIN). and, it has currently been working on cordination with NGO-FONIN and ILO Nepal. 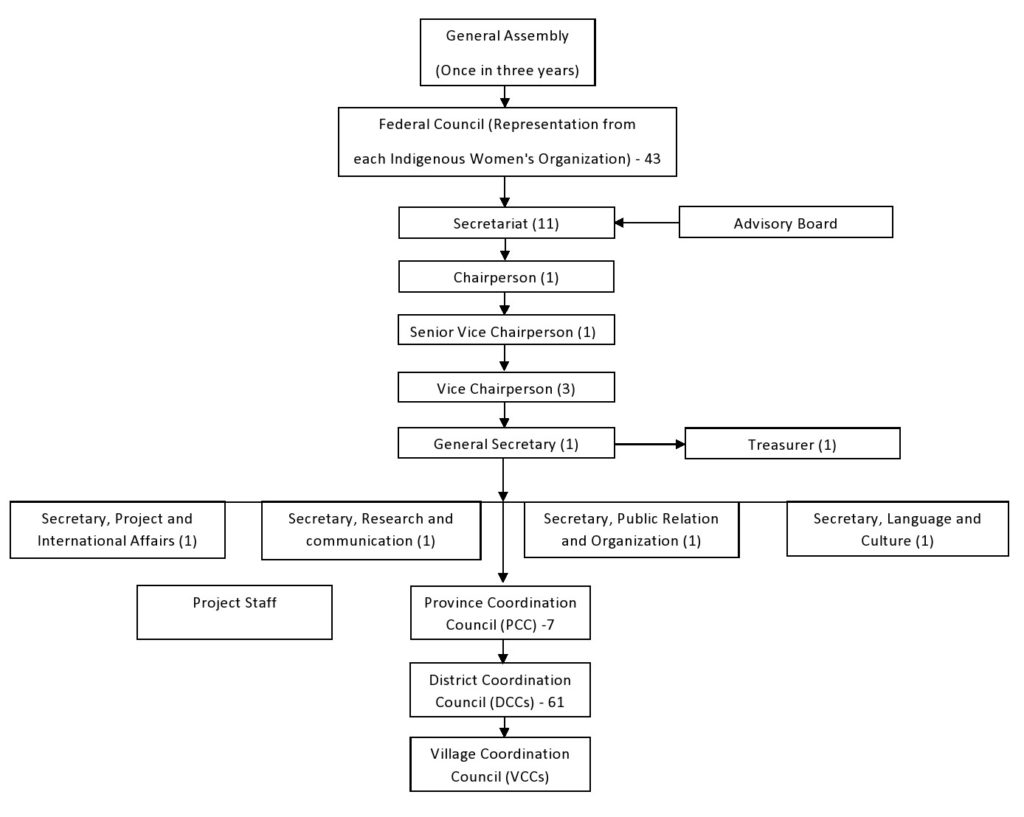